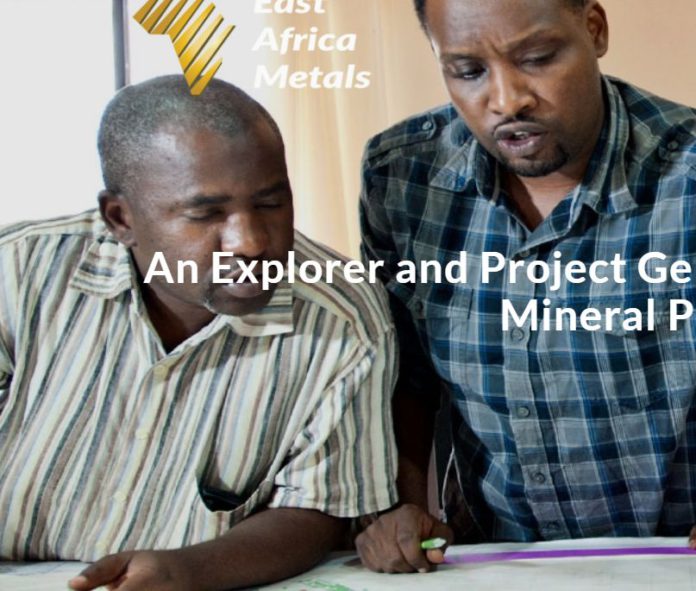 – East Africa Metals Inc. (TSXV: EAM) (“East Africa”, “EAM” or the “Company”) would like to provide an update on the ongoing exploration of its gold and gold/copper/zinc projects in the Federal Democratic Republic of Ethiopia (“Ethiopia”).

After productive meetings with government officials in Addis Ababa last week, the Company is looking to building on the success achieved over the past ten years through the Company’s investment of approximately $30,000,000 in exploration with the support of the Ministry of Mines and Petroleum (“MoMP”). 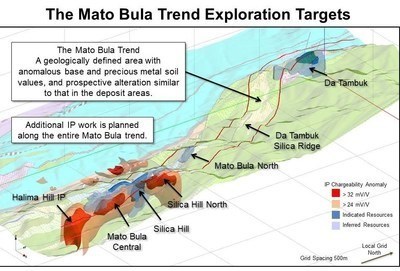 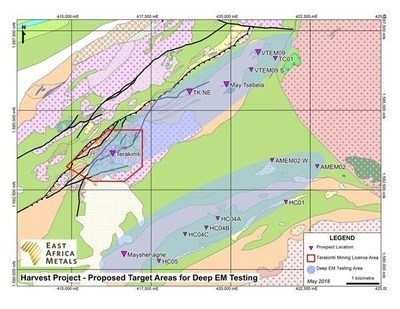 East Africa is preparing to initiate a fully funded $2,700,000 exploration program announced in early 2021 (see new release February 1, 2021). The six-month state of emergency declared in the Tigray region was lifted on May 4th, 2021.  It is anticipated that commercial activity in the Tigray region will normalize in the near future, as it recovers from the impacts of the COVID pandemic and the political unrest.

EAM has completed the planning and received government approval for the $2,700,000 Phase 1 exploration program that will include 8,000 meters of diamond drilling, 115 line kilometers of geophysical surveys, environmental, metallurgical studies and resource calculations/updates. The initiation of the Phase 1 diamond drilling program is expected to begin immediately after the Government declares the region ready for field operations.

EAM’s management has confidence in the potential of the Company’s exploration assets in the Tigray region and looks forward continued participation in what has become an active and emerging exploration sector.

The Company has equal confidence in progressive policy initiatives of the Ethiopian government under the administration of the recently appointed Minister of Mines, His Excellency Takale Uma. Ethiopia’s MoMP has undertaken a program of major reforms to improve the Ethiopian Mining Proclamation  designed to align government policy with the needs of international and domestic resource investors.  These policy revisions should result in significant growth in Ethiopia’s mining sector, promoting the interests of both artisanal miners and exploration and mining companies by improving the ease of access to licenses and finance for Small to Medium Enterprises (SME) and large-scale miners.

Based on the sale of the 70% interest of EAM’s Ethiopian subsidiary, Tigray Resources Inc. (“TRI”) to Tibet Huayu Mining Co. Ltd (news release dated February 8, 2019), EAM retains the mineral rights and all exploration obligations for the prospective targets not incorporated in the current resources defined within the Terakimti, Mato Bula and Da Tambuk mining licenses (“EAM Mineral Resources”). EAM will advance the exploration agenda with the objective to expand and upgrade the current resource base and drill untested, high priority exploration prospects.

Furthermore, additional target generation is recommended through deep and downhole EM programs over prospective terrains at Harvest and I.P surveying along the untested Mato Bula Trend terrain at Adyabo.

Management DiscussionThe Company believes the work and advancement on the projects completed to date indicate both the commercial production potential of the defined deposits and the significant exploration potential of this area within the Arabian Nubian Shield. Management continues to believe there is excellent potential for resource expansion within the Harvest and Adyabo properties, as described in the EAM’s news release dated May 17, 2018.

Government approval for the extension of exploration licenses and the proposed 2020 drill program has been received. The initiation of the Phase 1 diamond drilling program is expected to begin immediately after the Government declares the region ready for field operations.

EAM currently has three approved Mining Agreements with Ethiopia’s Ministry of MoMP; the Terakimti Oxide deposit Mining license has been issued (news release dated December 7, 2017) and Mining Agreements for the Mato Bula and Da Tambuk deposits have been approved and licences issued. For the additional prospective targets of interest that are located on ground outside of existing mining licences, the Company has received Extension/Inclusion agreements from the MoMP to allow additional time to qualify targets as they may complement existing Licence resources.

Andrew Lee Smith, P.Geo., C.E.O., a Qualified Person under the definitions of National Instrument 43-101, has reviewed and approved the technical contents of this news release.

More information on the Company can be viewed at the Company’s website: www.eastafricametals.com

On behalf of the Board of Directors:

This news release contains “forward-looking information” within the meaning of applicable Canadian securities legislation. Generally, forward-looking information can be identified by the use of forward-looking terminology such as “anticipate”, “believe”, “plan”, “expect”, “intend”, “estimate”, “forecast”, “project”, “budget”, “schedule”, “may”, “will”, “could”, “might”, “should”, “indicate” or variations of such words or similar words or expressions. Forward-looking information is based on reasonable assumptions that have been made by East Africa as at the date of such information and is subject to known and unknown risks, uncertainties and other factors that may cause the actual results, level of activity, performance or achievements of East Africa to be materially different from those expressed or implied by such forward-looking information, including but not limited to: timing of receipt of mining permit; timing of mining development; projected heap leach recoveries ; early exploration; the closing of the agreement with the exploration and development company to advance  the Magambazi Project or identify any other corporate opportunities for the Company;  mineral exploration and development; metal and mineral prices; availability of capital; accuracy of East Africa’s projections and estimates, including the initial mineral resource for the Adyabo, Harvest  and Magambazi Properties; interest and exchange rates; competition; stock price fluctuations; availability of drilling equipment and access; actual results of current exploration activities; government regulation; political or economic developments; foreign taxation risks; environmental risks; insurance risks; capital expenditures; operating or technical difficulties in connection with development activities; personnel relations; the speculative nature of strategic metal exploration and development including the risks of diminishing quantities of grades of reserves; contests over title to properties; and changes in project parameters as plans continue to be refined, as well as those risk factors set out in  in East Africa’s management’s discussion and analysis for the three months and nine months ended September 30, 2018 and for the year ended December 31, 2017, and East Africa’s listing application dated July 8, 2013 Mineral Resources which are not Mineral Reserves do not have demonstrated economic viability. The contained gold, copper and silver figures shown are in situ. No assurance can be given that the estimated quantities will be produced. Forward-looking statements are based on assumptions management believes to be reasonable, including but not limited to the timely closing of the financing; the timely closing of the Handeni Property definitive agreement; the price of gold, silver, copper and zinc; the demand for gold, silver, copper and zinc; the ability to carry on exploration and development activities; the timely receipt of any required approvals; the ability to obtain qualified personnel, equipment and services in a timely and cost-efficient manner; the ability to operate in a safe, efficient and effective manner; the renewal or extension of exploration Licences; the regulatory framework regarding environmental matters, and such other assumptions and factors as set out herein. Although East Africa has attempted to identify important factors that could cause actual results to differ materially from those contained in forward-looking information, there may be other factors that cause results not to be as anticipated, estimated or intended. There can be no assurance that such information will prove to be accurate, as actual results and future events could differ materially from those anticipated in such information. The Company does not update or revise forward looking information even if new information becomes available unless legislation requires the Company do so. Accordingly, readers should not place undue reliance on forward-looking information contained herein, except in accordance with applicable securities laws. Neither TSX Venture Exchange nor its Regulation Services Provider (as that term is defined in the policies of the TSX Venture Exchange) accepts responsibility for the adequacy or accuracy of this release.